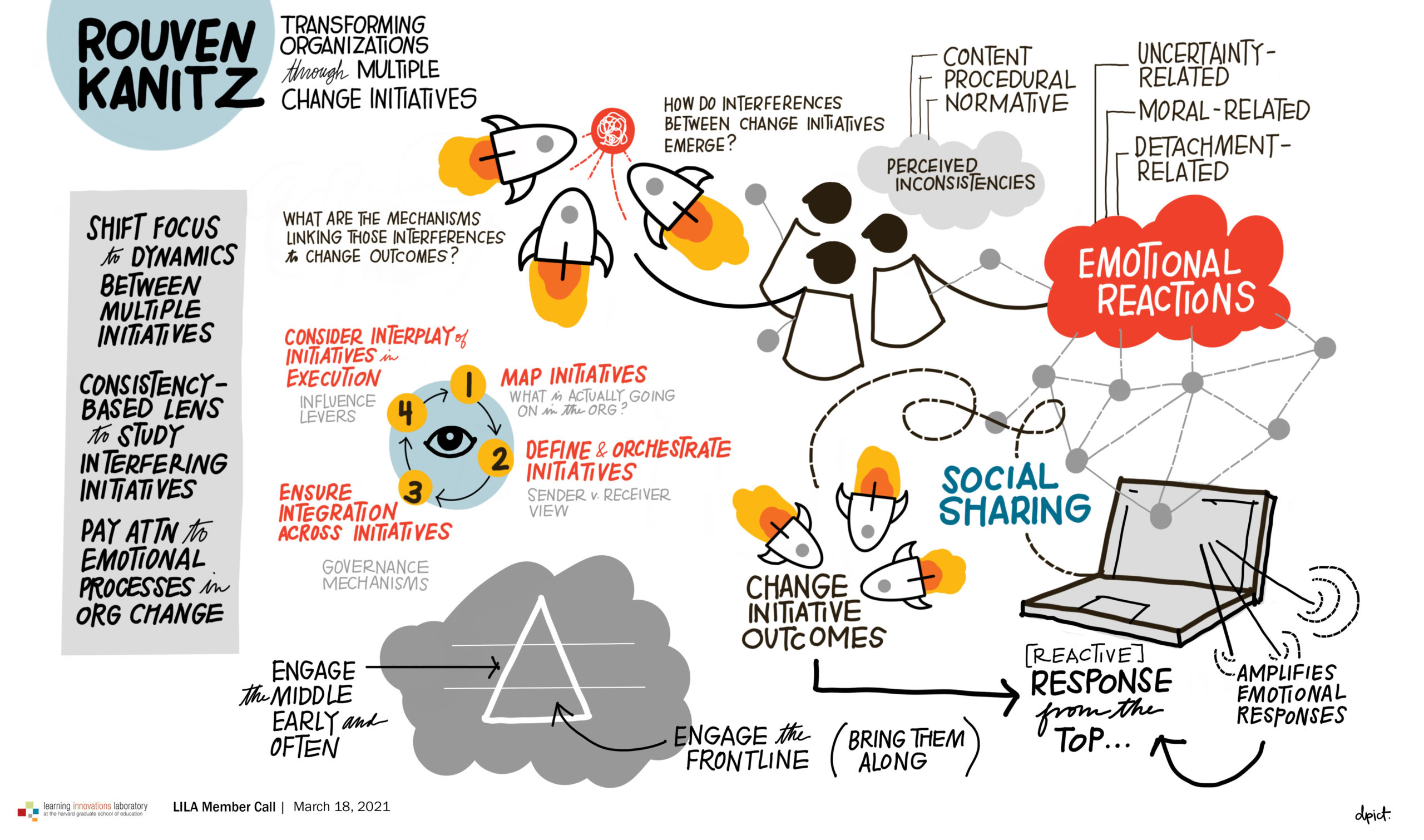 We started off the year at LILA by gaining an understanding of system leadership through the view of complex adaptive systems. In February, we explored how we might see the system by understanding the change ecosystem and identifying the problematic patterns that are keeping the current system in place.  We also took a network perspective to understand how one can begin to change the system using strategies such as enabling wide bridges in our organization. As we move towards the April gathering, we will turn our attention to how system change can be scaled by examining manage connections for scale, create sensor networks for collective sensemaking, understanding how power dynamics impact engagement and agency. In today’s call, we will focus on understanding how engaging with multiple change initiatives can create potential interfere, which can create collective emotions in the organization that can undermine the change performance.

TechCorp is technology organization with 10B annual revenue with 40K employees, top management developed a new strategic vision to take the company that manufactured technology products to a full-service provider for digital services.  They rolled out an internally oriented plan that included people-oriented, and business-oriented principles for the organization. At the beginning the change was well received.  After a year, the management introduced a second change initiative that was more externally oriented focused on rebranding and sales and marketing initiative which introduced new elements to the organization.  When the second initiative was introduced, we observed an increased resistance to the initiative especially from middle management.  This second initiative interfered with the first and caused the emergence of unexpected collective negative emotion across the organization.  This led us to try to better understand how those differences actually emerged and what were the mechanisms that actually explain why these interferences led to harmful outcomes.

We conducted a longitudinal qualitative study over 4 years from interviews, surveys, and observation which revealed the key factors that contributed to the harmful outcome. The organization had autonomous governance with one initiative based in the US and the other in Europe.   In addition, managers had narrow project management orientation. They saw the change initiatives as a career steppingstone and were not focused on what was actually happening outside of those initiatives. This led to a stronger “sender” orientation which contributed to less thought being given about how the change initiatives were received by the employees.

There were three kinds of inconsistencies that contributed to people’s shared judgement around the lack of agreement between the initiatives.

The values and norms signaled by different initiatives led to negative individual emotional states such as those related to uncertainty (confusion and worry), moral (indignation and shock), and detachment (annoyance and apathy). Individual emotions were later translated into the social network and became collective emotion where a significant number of people were sharing, thinking, and feeling negative emotions. Over time, these negative emotions affected people who then became disengaged. This affected the performance of the change initiatives through delays, requirement of more resources, and departure of senior management.

System thinking is about the interconnection of elements and how they interact with each other to produce different states. It’s important to understand that not all interference between multiple change initiatives lead to this harmful model. Managers can intervene to prevent extreme cases. They can first map the system to gain perspective on what is really going on in the organization and even try to surface change residuals from past initiatives. They can also define and orchestrate initiatives by accounting for the sender versus receiver perspective. Furthermore, they can ensure a proper governance mechanism to ensure integration across initiatives. Finally, they can consider the interplay at initiatives in execution and influence the levers.

How do you know that it was actually the interference that caused the negative outcome not substance?

How does agency impact ability and willingness to interact with change?